The 9 Coolest (and Most Unique) Hotels in Kentucky 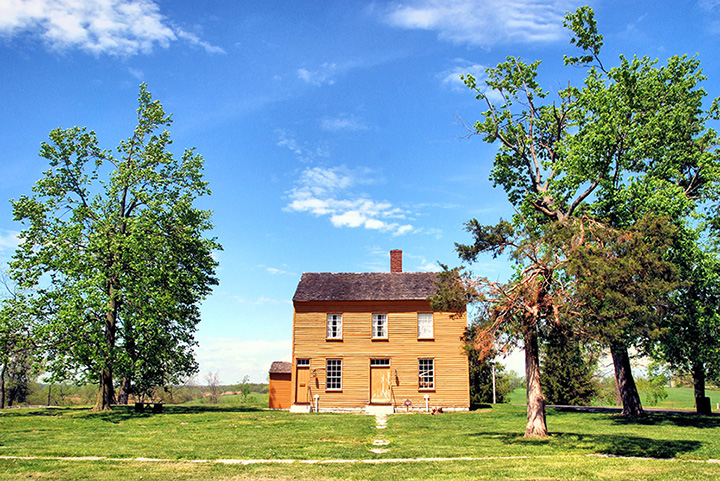 Sleep in a teepee, browse contemporary art at 3 a.m., make a castle your home for an evening, or relive the Roaring Twenties at one of the most unique hotels in Kentucky. From five-star luxury hotels to quiet, country retreats, Kentucky’s most unique hotels offer some of the weirdest, most fabulous, and most historic accommodations you’ll find in the U.S.

Though it’s now a franchise and has several locations throughout the country—including one in Lexington—none of the replicas are quite as unique as the original 21c Museum Hotel in Louisville, Kentucky. Museum owners renovated several old tobacco and bourbon houses that were decaying in downtown Louisville and transformed them into a boutique hotel and contemporary art gallery that’s open 24 hours a day, seven days a week. Visitors can wander around the huge art museum, sleep in modern and eclectic rooms, and enjoy delicious contemporary cuisine and custom bourbon cocktails.

During the 19th century, Harrodsburg, Kentucky, was home to the third largest Shaker community in the U.S. Today, that history is celebrated at Shaker Village of Pleasant Hill where visitors can experience what life was like for Shaker communities. A stay at the inn is a unique experience—visitors can sleep in rooms filled with Shaker-themed furniture in restored buildings that were built by the Shakers themselves. Each room is decorated differently, making every stay at the inn a new experience.

Nearly 100 years old, the Brown Hotel in Louisville, Kentucky, is a gorgeous historic hotel that has been host to some of the world’s most recognizable names over the years, including Dick Martin, Harry Truman, Elizabeth Taylor, Muhammad Ali, Jimmy Carter, and Barack Obama. The Brown Hotel mesmerizes visitors with its intricate Victorian décor that extends from floor to ceiling, and the hotel’s upscale restaurant—English Grill—is the birthplace of Kentucky’s signature dish: The hot brown.

The Seelbach Hilton in Louisville, Kentucky, defines luxury in accommodations. When you enter the historic hotel, you’re greeted by thick marble pillars, a huge, stunning chandelier, and intricate bronze accents. At over 100 years old, the hotel is more than a place to stay—it’s a landmark. In the Roaring Twenties, the Seelbach was the place to be in Louisville and was frequented by gangster Al Capone and author F. Scott Fitzgerald. In fact, many of the scenes and characters in “The Great Gatsby” were based on Fitzgerald’s time at the Seelbach, and many scenes from the 2013 movie adaptation were filmed there.

Jailer’s Inn Bed and Breakfast in Bardstown, Kentucky, is composed of two structures that, until 1987, were used as jailhouses for Nelson County prisoners. The older of the two buildings is nearly 200 years-old and features 30-inch thick walls and an upstairs dungeon. Today, the structures no longer house prisoners. Instead, visitors choose to stay at the jailhouses that have been converted into a bed and breakfast where visitors sleep in rooms converted from old jail cells.

Set next to the Ohio River in downtown Louisville, Kentucky, the Galt House is the city’s only waterfront hotel and is a popular destination for Thunder Over Louisville—the largest fireworks display in North America that kicks off the Kentucky Derby festivities. Visitors to the Galt House can dine in the hotel’s signature restaurant—RIVUE—a spinning dining room on top of a 25-story tower that offers stunning views of the city and the Ohio River.

In Cave City, Kentucky, you can enjoy all the amenities of a modern hotel while staying in a structure that looks like a teepee. Fifteen teepee structures make up Wigwam Village. Situated in a semi-circle, each teepee is a private hotel room complete with double beds and bathrooms. Wigwam Village is a popular hotel among visitors to Mammoth Cave who are looking for a truly unique lodging experience.

Once used as a schoolhouse for the children of coal miners in eastern Kentucky, the Benham Schoolhouse Inn in Benton, Kentucky, now serves as a hotel for travelers to the area, but it retains the feel of its roots with lockers lining the hallways, antique furniture in the rooms, and rooms numbered by years that classes graduated from the school. Benham is a novel hotel that serves as a reminder of Kentucky’s coal mining history.

The more than 100-year old Boone Tavern Hotel in Berea, Kentucky, is a historic hotel with white brick walls, black shutters, and tall pillars that make the structure look like a picturesque southern plantation mansion. The hotel is owned by Berea College, and college students earn free tuition for working there. Rooms in the hotel feature furniture handcrafted by students of the college, and traditional southern fare is served in the hotel’s restaurant.